The Cathedral of Orvieto

Symbol of the city of Orvieto itself, the Duomo is one of the most beautiful cathedrals in Italy and in the world. It looks like a magnificent building that incorporates different architectural styles. In particular we can define a wonderful example of equilibrium and mixtures of Gothic and Romanesque styles, even if the cathedral maintains its unique peculiarities. There were many people who participated in the various phases of design and construction of the Duomo. 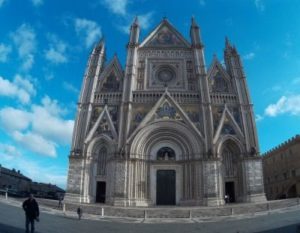 Among the many of them, Arnolfo di Cambio and Lorenzo Maitani have particular relevance, as far as designing is concerned (in particular the Sienese Maitani owes much of the credit for the realization of the splendid façade) and many sculptors, goldsmiths and painters as regards the “embellishment” phase and finishing of the cathedral. Among the sculptors stands out the figure of Ippolito Scalza (local architect former architect of several works in Orvieto including the Palazzo Comunale and other interventions in several palaces). Dello Scalza can be admired inside the cathedral the statue of the Pietà (or Deposition) and the majestic pipe organ. Among the painters a key role were Gentile da Fabriano, Lippo Memmi, Fra Angelico, Ugolino di Prete Ilario and Luca Signorelli, the latter especially for the realization of the frescoes of the two chapels “del Corporale” and “San Brizio”.
To increase the monumentality of the Cathedral and, with it, that of the whole, on the one hand there are the low canons of the canons and, on the other, the most ambitious piers of Palazzo Soliano and the Papal Palaces, which however, laterally recede and on the bottom, they dialogue in discretion with the Cathedral. The Papal Palaces, like Palazzo Soliano, today the headquarters of MODO (the articulated museum circuit of the Opera del Domo of Orvieto), flourished as a renovation and expansion of a bishop already existing in the twelfth century, on the impulse of some popes who resided in Orvieto from 1262 to 1284: Urban IV, Gregory X and Martin IV. The Palazzo Soliano was instead built by the civic power at the request of Boniface VIII, following a peace agreement of 1297 between the Pope and the Municipality.