The origins of Orvieto have Etruscan roots when, in the IX-VIII century a.C., the cliff was inhabited for the first time by these populations. Velzna, as it was called Orvieto in ancient times, was a very flourishing settlement that based its economy on the production of ceramics (the bucchero) and on the processing of bronze.
The city, fighting against the expansionist policy of Rome, was occupied by the enemy army in 254 BC. and it was razed to the ground. The result was the escape of its inhabitants and some of them were forcibly transferred to the heights of Lake Bolsena.
During the barbarian invasions the city was occupied by Alaric and Odoacre and was the scene of numerous battles and battles. 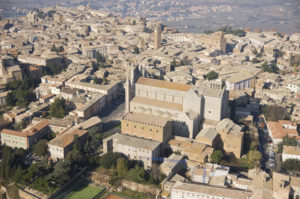 From 596, Orvieto, was occupied by the Longobards of Agilulfo and, later, in the context of the religious rebirth wanted by Ottone III, the construction of abbeys and monasteries were promoted throughout the surrounding territory.
The Municipality was established starting from 1137 and, after twenty years, under the influence of Pope Adrian IV, began the clashes between the guelph factions (filopapali) and the Ghibelline factions (pro-imperial) that prolonged over time and marked the town’s history , turning the center into a Guelph stronghold.
In 1200 the General Council of the Quattrocento was created with the subsequent election of the Capitano del Popolo and a Government of the Elders and the Arts with a prior and with his own magistracy. Furthermore, in 1290, the construction of the cathedral began, in addition to those of other churches in the city. Between the end of the 1200s and the first years of the 1300s, with the pope Martin IV, the French arrived in the city against which the people rebelled, giving rise to a series of clashes between factions. In 1354, Cardinal Albornoz occupied Orvieto by submitting it to the State of the Church even though the city continued to maintain its municipal institutions. We will have to wait until 1860 for the city to be annexed to the Kingdom of Italy.